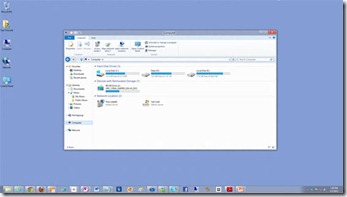 It looks like Paul Thurrot and the legendary great Canouna were able to put their hands on the latest build of Windows 8 (Build 8370) ahead of the rest of the world as usual 🙂 these screenshots have been posted by Paul at WinSuperSite and Canouna at WinUnleaked respectively, though Thurrot says that screenshot is from an older build many people including myself believe it is not, it’s obvious by the changes made to aero as you can see in the back and forward icons, the ribbon etc, these subtle changes make aero look more in sync with the rest of the Metro GUI, the new start screen icon seems to have suffered a small refinement from previous builds too.

There’s also a new wallpaper as you can see on the Canouna screenshot which I have posted below if you are interested, I’m liking Windows 8 more and more with each new build, true that it looks weird with no Start menu when you first start using it, but after a little while it begins to grow on you, I have been using it as my primary OS for over a  month now and I find it to be very solid, can’t wait for next month’s Release Preview.

Once again I’m giving Linux a try, I’m posting this entry from my Ubuntu Linux 7.10 desktop and …