Microsoft has released to the public the same build it recently released to beta testers last week, now Windows Vista Pre-RC1 build 5536 can be downloaded by the first  100,000 people who start the download. 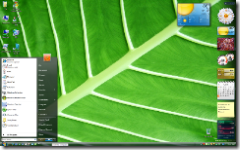 This build is a great  improvement over any previous builds, it clearly shows enhanced stability and it is a lot more responsive, This is pretty close to final RC1 mile stone so obviously very good, If were waiting to try a good build of Vista then this is the one to try. Get it while you can !

Update!  On Sept. 06 Microsoft officially released RC1 to the public; the link above has been fixed to the current RC1 download site.

My old PC was getting old, I have been with it for a while and since I love …

The z623 sound is amazing! I listen to mostly Trance and Electronica in general, but I can tell …