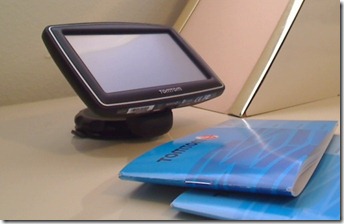 Ok, a GPS was one of those things I have been after for a while, but I refused to pay a lot for it, since I really don’t need it too much, except those few times I go out of town and addresses can be a pain to find, so my local RadioShack had the TomTom XL 340s on sale for just $159, since they were still closed because it was very early in the morning and the Sears next to them was already open I asked the sales person if they would match the prices and he said yes without delay, he asked where I had seen that price and after telling him online, he asked how much they had it on sale for, I said I wasn’t sure if it was $150 or $159, he went ahead and checked RadioShack’s site and it was actually $159, however guess what… he matched the price to $150, so that’s what I ended up paying plus taxes, (A friend tells me the sales person wasn’t just nice, it’s because Sears actually has a price match + $9.00 USD policy) either way I think I got a good deal because all other retail stores had it at anything from $229 to $249.

This is the first real GPS I have ever had (Previously used my Phone’s) and so far so good, It works great and guides me everywhere I have asked it to without issue, even in those far from the city areas, It is packed with features you only find in expensive models, TomTom needs to get their act together in what has to do with the software/firmware updates though, they definitely have issues with that, the vast majority of negative reviews I have seen about the XL 340s is about people getting frustrated with the software and maps updates, that’s why I gave it a 4 in ease of use at my Bestbuy review of this item, the actual GPSs graphical interface is very user friendly though .
The main problem I see is that the new software they attempt to put in does not fit in the first upgrade attempt, then on second attempt the old firmware will update first thus being able to detect the problem and remove the old stuff first then it all goes smoothly, but most people never make it to the second try it seems because the error messages are not clear enough, just disconnect the device totally from your PC and retry the updates, old stuff has to go first then the new maps will fit, If you have issues updating your device just follow the following simple steps and you should be good to go:

1-) Just go to the TomTom Home control panel, and play with the update options in the menus.

2-) At some point it should tell you that you can update your software and maps, just accept it.

3-) After downloading and trying to install at some point it will tell you that it cannot because there’s not enough space in the device, just accept that.

4-) Click on tools on top and select ‘Disconnect Device’ once it says it is now safe to turn it off disconnect it and log off the Home software as well by clicking on  LOGOFF.

5-) Close the TomTome Home2 software completely by right clicking on its tray icon and selecting “Exit”.

6-) Reconnect the device to your USB and start the TomTom Home software if it doesn’t start automatically, then attempt the update again, this time it should update its firmware and other software first and then it should notify you to update the maps, just follow the updates as presented.

That’s what I did and it worked for me, Other people have chosen to just using Windows Explorer navigate into the device and just delete the Maps database, I don’t know how that would work because I did not try it myself, if you decide to do that, BE SURE you backup your device first using the TOMTOM Home2 software, specially be sure to backup your maps, voices and favorites, Once you have passed the problem with the map update I’m sure you will be a happy camper as well with this GPS, good luck!

A new version of Windows Live Messenger has leaked to the web, version 8.5, some of the changes noticeable on …

This GPS provides an unsurpassed display, showing you topographical maps and current updates
on the screen. It is one of the greatest investments for the safety of children one could
make to feeling of losing your child even if it’s for minutes because it will be the most devastating and stressful situation you will ever go through. Nowadays, built-in GPS receivers are far less expensive, have better reception, and are much more intuitive and agile.

Hey, sorry for the late response, haven’t been paying too much attention to my blog lately sorry, as your for your question about being able to see traffic reports, no, by default you cannot, however I think you can if you buy an addional adapter and a subscription to traffic updates from TomTom you can.

Hey can see live traffic in your area with this GPS? a friend told me yes but I can’t find this on the feature set