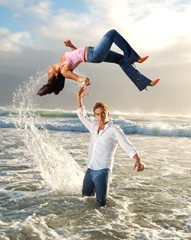 LONDON (AFP) – Scientists have discovered a ground-breaking way of levitating ultra small objects, which may revolutionize the design of micro-machines, a new report says.  Physicists said they can create “incredible levitation effects” by manipulating so-called Casimir force, which normally causes objects to stick together by quantum force.

The phenomenon could be used to improve the performances of everyday devices ranging from car airbags to computer chips, say Professor Ulf Leonhardt and Dr Thomas Philbin from Saint Andrews University.

Casimir force — discovered in 1948 and first measured in 1997 — can be seen in a gecko’s ability to stick to a surface with just one toe.  Now the British scientists say they can reverse the Casimir force to cause an object to repel rather than attract another in a vacuum.

“The Casimir force is the ultimate cause of friction in the nano world, in particular in some micro-electromechanical systems,” said Leonhardt, writing in the August issue of New Journal of Physics. “Micro or nano machines could run smoother and with less or no friction at all if one can manipulate the force,” he added.  And he added: “In order to reduce friction in the nanoworld, turning nature’s stickiness into repulsion could be the ultimate remedy. Instead of sticking together, parts of micromachinery would levitate.”

Leonhardt stressed that the practise is possible only for micro-objects. But he underlined that, although in principle it may one day be possible to levitate humans, that day is a long way off.  “At the moment, in practice it is only going to be possible for micro-objects with the current technology, since this quantum force is small and acts only at short ranges,” he said. “For now, human levitation remains the subject of cartoons, fairytales and tales of the paranormal.”

Their research was to be published in the New Journal of Physics.

Water found on Mars: Is Life Next?

According to a press release by the news agency Reuters, Nasa scientists on Thursday said they have found what …