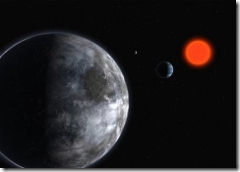 Astronomers have discovered the most Earth-like planet outside our Solar System to date, an exoplanet with a radius only 50% larger than the Earth and capable of having liquid water. Using the ESO 3.6-m telescope, a team of Swiss, French and Portuguese scientists discovered a super-Earth about 5 times the mass of the Earth that orbits a red dwarf, already known to harbour a Neptune-mass planet. The astronomers have also strong evidence for the presence of a third planet with a mass about 8 Earth masses.

This exoplanet – as astronomers call planets around a star other than the Sun – is the smallest ever found up to now and it completes a full orbit in 13 days. It is 14 times closer to its star than the Earth is from the Sun. However, given that its host star, the red dwarf Gliese 581, is smaller and colder than the Sun – and thus less luminous – the planet nevertheless lies in the habitable zone, the region around a star where water could be liquid! The planet’s name is Gliese 581 c.

“We have estimated that the mean temperature of this super-Earth lies between 0 and 40 degrees Celsius, and water would thus be liquid,” explains Stephane Udry, from the Geneva Observatory (Switzerland) and lead-author of the paper reporting the result. “Moreover, its radius should be only 1.5 times the Earth’s radius, and models predict that the planet should be either rocky – like our Earth – or fully covered with oceans,” he adds.

“Liquid water is critical to life as we know it,” avows Xavier Delfosse, a member of the team from Grenoble University (France). “Because of its temperature and relative proximity, this planet will most probably be a very important target of the future space missions dedicated to the search for extra-terrestrial life. On the treasure map of the Universe, one would be tempted to mark this planet with an X.”

The host star, Gliese 581, is among the 100 closest stars to us, located only 20.5 light-years away in the constellation Libra (“the Scales”). It has a mass of only one third the mass of the Sun. Such red dwarfs are intrinsically at least 50 times fainter than the Sun and are the most common stars in our Galaxy: among the 100 closest stars to the Sun, 80 belong to this class.

“Red dwarfs are ideal targets for the search for low-mass planets where water could be liquid. Because such dwarfs emit less light, the habitable zone is much closer to them than it is around the Sun,” emphasizes Xavier Bonfils, a co-worker from Lisbon University. Planets lying in this zone are then more easily detected with the radial-velocity method, the most successful in detecting exoplanets.

Two years ago, the same team of astronomers already found a planet around Gliese 581. With a mass of 15 Earth-masses, i.e. similar to that of Neptune, it orbits its host star in 5.4 days. At the time, the astronomers had already seen hints of another planet. They therefore obtained a new set of measurements and found the new super-Earth, but also clear indications for another one, an 8 Earth-mass planet completing an orbit in 84 days. The planetary system surrounding Gliese 581 contains thus no fewer than 3 planets of 15 Earth masses or less, and as such is a quite remarkable system.

The discovery was made thanks to HARPS (High Accuracy Radial Velocity for Planetary Searcher), perhaps the most precise spectrograph in the world. Located on the ESO 3.6-m telescope at La Silla, Chile, HARPS is able to measure velocities with a precision better than one metre per second (or 3.6 km/h)! HARPS is one of the most successful instruments for detecting exoplanets and holds already several recent records, including the discovery of another ‘Trio of Neptunes’.

The detected velocity variations are between 2 and 3 metres per second, corresponding to about 9 km/h! That’s the speed of a person walking briskly. Such tiny signals could not have been distinguished from ‘simple noise’ by most of today’s available spectrographs.

“HARPS is a unique planet hunting machine,” says Michel Mayor, from Geneva Observatory, and HARPS Principal Investigator. “Given the incredible precision of HARPS, we have focused our effort on low-mass planets. And we can say without doubt that HARPS has been very successful: out of the 13 known planets with a mass below 20 Earth masses, 11 were discovered with HARPS!”

HARPS is also very efficient in finding planetary systems, where tiny signals have to be uncovered. The two systems known to have three low mass planets – HD 69830 and Gl 581 – were discovered by HARPS.

“And we are confident that, given the results obtained so far, finding a planet with the mass of the Earth around a red dwarf is within reach,” affirms Mayor.

Jupiter Tiny Spot Has Gone From White To Red

WASHINGTON - Just a little more than a year ago, the small spot on Jupiter was a pale …