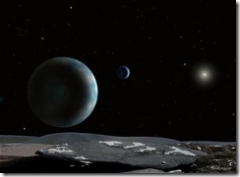 An artist’s conception created at the Harvard-Smithsonian Center for Astrophysics and released on January 3, 2006 shows Pluto and its moon Charon as seen from the surface of one of Pluto’s newly discovered candidate satellites. Pluto was stripped of its status as a planet August 24, 2006 when astronomers from around the world redefined it as a “dwarf planet”.

Jupiter Tiny Spot Has Gone From White To Red

WASHINGTON - Just a little more than a year ago, the small spot on Jupiter was a pale …

Water found on Mars: Is Life Next?

According to a press release by the news agency Reuters, Nasa scientists on Thursday said they have found what …