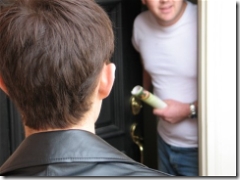 This is it. PBS will nationally offer KNOCKING for broadcast Tuesday May  22 at 10pm on the documentary series “Independent Lens.” IMPORTANT NOTE: Many local PBS stations have chosen to show KNOCKING very late at night, even after midnight. Some local stations are not showing it at all. You must check with your local PBS station to find out when KNOCKING will be shown.

KNOCKING opens the door on Jehovah’s Witnesses. They are moral conservatives who stay out of politics and the Culture War, but they won a record number of court cases expanding freedom for everyone. They refuse blood transfusions on religious grounds, but they embrace the science behind bloodless surgery. In Nazi Germany, they could fight for Hitler or go to the concentration camps. They chose the camps. Following two families who stand firm for their controversial and misunderstood Christian faith, KNOCKING reveals how one unlikely religion helped to shape history beyond the doorstep.

The development version of the image editor GIMP has been bumped to version 2.99.2 which has been described …

Ok, my previous Microsoft Lifecam was giving lots of trouble, especially with audio and it was horrible for …