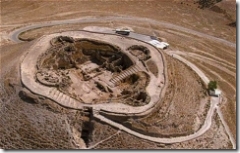 This undated photo made available by the Government Press Office, Tuesday, May 8, 2007, shows an aerial view of the the hilltop compound of Herodium near the west Bank town of Hebron. An Israeli archaeologist has found the tomb of King Herod, the legendary builder of ancient Jerusalem and the Holy Land, at a hilltop compound south of the city, the Hebrew University announced. (AP Photo/Yaacov Sa’ar/GPO)

The find, which could provide insights into one of the Bible’s most reviled yet influential figures, includes hundreds of pieces of an ornate sarcophagus, but no bones and no inscription that would seal the identification.

Although the tomb was shattered and empty, leaders of the Israeli team that unearthed it said Tuesday they will dig on in the hope of finding jewelry, other artifacts or even the biblical monarch’s remains.

Herod was the Jewish proxy ruler of the Holy Land under imperial Roman occupation from 37 B.C. His most famous construction project was expanding the Jewish Second Temple in Jerusalem.

The Herod of the Bible and of Christian tradition was a bloodthirsty megalomaniac, who flew into a paranoid frenzy when he encountered the three wise men on their way to Bethlehem with gifts for the baby Jesus, and telling of the birth of a new king of Israel.

“Then Herod, when he saw that he was mocked of the wise men, was exceedingly wroth, and sent forth, and slew all the children that were in Bethlehem, and in all the coasts thereof, from two years old and under…” (Matthew 2:16).

How To Achieve True Happiness

Many people go through life pursuing happiness, some get involved in politics and go to great lengths in …