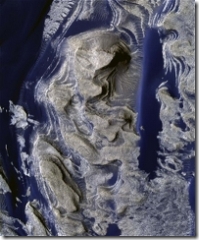 A camera on board NASA's Mars Reconnaissance Orbiter shows this exquisite colour image of the Martian surface giving a tantalising glimpse into the Red Planet's watery past.

Shots of the deep valley Candor Chasma show light coloured areas of rock where water could have flowed.

This image provided by Science shows light-toned layered rock in Becquerel Crater on Mars as photographed by the HiRISE (High Resolution Imaging Science Experiment) camera on board NASA's Mars Reconnaissance Orbiter. The orbiter images show alternating layers of dark- and light-toned rock within which are a series of fractures, surrounded by what researchers call 'halos' of light-toned bedrock. These halos are believed to indicate where fluids, probably water, passed through the bedrock. The layers show cyclic changes in thickness, which may be due to annual climate cycles, a cyclic variability in the source of the sediment, or both. The blue areas are extensive fields of sand dunes.

An orbiting spacecraft has sent back new evidence for the presence of water on Mars. Scientists long have debated whether water flowed on the red planet, with evidence increasing in recent years. The presence of water would raise the possibility of at least primitive life forms existing there.

Latest Post: KNOW WHAT A COMMAND OR APP DOES BEFORE YOU EXECUTE THEM Our newest member: Aimee has left you 2 messages www.datef.sitew.org Recent Posts Unread Posts Tags