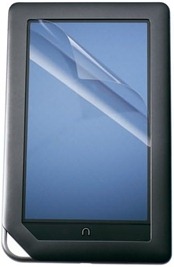 On this picture leaked to the web a touchscreen color nook appears to be revealed by an overzealous screen protector,  up till now Barnes & Noble’s has done a good job in keeping the supposed and rumored 3rd generation device from public eyes until now,  This undated picture discovered by CNET shows a button-less impressing good looking device but doesn’t tell much about the features; soon after discovered by CNET and published by a third party the picture was removed from the Barnes & Noble’s site but CNET managed to make a copy of it.

Perhaps releasing this new generation Nook is what Barnes and Noble was thinking by registering the nookcolor.com domain. Then again, “Nook Color” is the name rumored for B&N’s new 7-inch color touchscreen device said to cost a mere $249.

For someone like me who just bought an e-reader a few months ago this will be hard to swallow, oh why didn’t I wait a little longer? I don’t know why but since day one when I got my Nook the first thing that came to my mind was: “shame it’s not a color screen”, it would always be nice to read The New York Times and PC Magazine in full color you know, that’s technology’s pace right there eat it techno people, we buy the latest gadget today and a month later it is old news.

Update: And it came true, B & N has officially announced the Nook Color on their website, Check it out!

As promised yesterday and after 5 years of development, Vista is finally finished. Jim Allchin, the co-president of …