There won’t be a new kernel

The next version of Windows will not be modular

The GUI (Graphical User Interface) will not be a radical change from Vista, however MS will introduce some welcomed changes that will certainly improve the user experience, for instance: a thicker dock like task bar where icons appear to be bigger, The new task bar might indeed have a lot more functionality than the existing one in Vista and will probably either do away with legacy features such as the quick launch and system tray areas, or improve those areas significantly.

In the following screenshot taken from a recent Windows 7 demonstration shown at D6 Conference you can appreciate the thicker task bar and multi touch features: 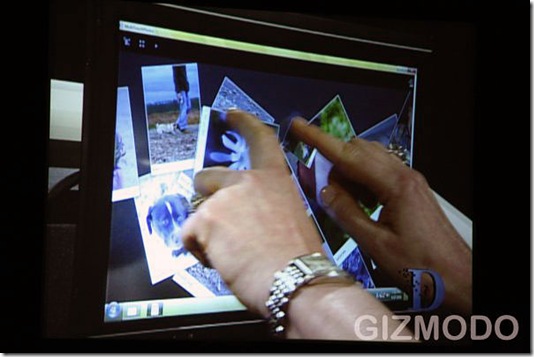 There are also two videos one taken at the D6 conference and officially released by Microsoft, while a second video is floating around which appears to be legitimate but I’m unable to identify its source, Check them out:

So far things don’t look too exciting for the next version of Windows, but I’m sure Microsoft will slowly show us more goodies, Microsoft definitely does not want to to experience the same level of criticism it went through with Windows Vista where they brought the expectations of windows enthusiasts too high and then under deliver on those promises, so I applaud them for that.

Got my new Motorola Q9c Smartphone

Spotify  has been testing a new theme to its interface, a few days ago I had the opportunity …

Kevin my sources are tech blogs and what I get to see on these videos, nothing is written in stone yet though, things might change from now to the final product.

How do you know the quicklaunch and tray will be removed? I haven’t seen anything at all about it, what are your sources?

Hello I didn’t actually fix it, I kind of hacked it to go around the error message, if you are interested let me know and I’ll put my hack somewhere for you.

Hey Ely how did you fix the mobile version? I keep getting weird error messags on my pages, where did you download your plugin from?

yeah and per MS release pattern this will be released when? 2020?

When will this so called new version arrive?